From Encyclopedia of Sindhi
(Redirected from Deewan Motihar)
Jump to: navigation, search 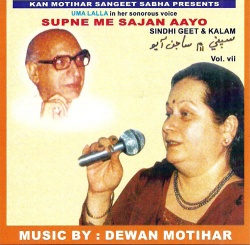 He is also a Music Maestro and has played Sitar as per details given below :

Recognition By Way Of Awards / Honours

Dewan received many Awards/ Honours both in India and abroad. Details of two prestigious Awards as Sindhi Singer are given below:

Kan Motihar gave music to many of Music Albums and also sung few of them.

As a matter of pride for Sindhi community, it may be noted that: