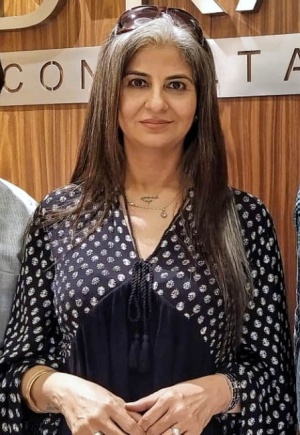 Mala Mansukhani ran her first marathon when she was 47. That same year, when she won the title 'Mrs. Gladrags' competition. She was the oldest participant and the only grandmother to tke part in the beauty contest. Despite being someone who was afraid of heights. She climbed Kalsubai, the highest peak in the Western Ghats in the state of Maharashtra, India. What's impressive is not tht she did this, but when she did it; she climbed the peak when she was 58. She is definately a person who can say, "Age is just a number"

She is a daughter, widow, mother, grandmother, fashionista, trendsetter, philanthropist, inspirational speaker and the founder of a non-profit organisation called 'Gorw Younger' which is engaged in enabling woman over forty to grow healthier, fitter and stronger through physical activities. Socially interactive events, cooking, counselling and cultural and performing arts. Mala is multi-faceted, an inspiration and a role model. She may be many different things to different people, but the one thing she isn't is old.