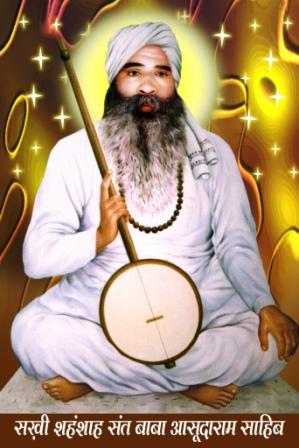 Sindh, once a state of undivided India, has been a land of the benevolent Saints, Ascetics, Sufis, and mendicants, who have generously,lovingly and indiscriminately served people of various religions, paths, tongues, castes, creed, lineages, tribes and communities. All of them have been equally showered with divine knowledge and grace. Sukkur and Rohri are as it were, the sacred shrines, places worthy of pilgrimage, as they have been the birthplace of several saints and seers who have instilled the souls of innumerous people with devotion and set them on the path of salvation.

Sant Baba Asudaram Sahib was one of those great Saints.Sant Baba Asudaram was born in the village of Jatoin in the Panno Aakil tehsil of the Sukkur district in the holy land of Sindh. He was born of Bhai Ludhromal and Rev Mother Chaini Bai, on the auspicious Ramnavmi day in the year 1895. (Samvat 1952)

From his early childhood, Sant Baba Asudaram Sahib, demonstrated, all signs of a great spiritual soul. Bearing a calm and composed disposition, he did not have an iota of the child-like caprice which attracted one and all in the village. On ataining the school going age, he was sent to the school at Panno Akil, but he shallowed no interest in studies, yet he completed his education till the fourth standard.

This aversion to the world, was a cause of worry for his father Bhai Ludhrodmal. On one occasion the famed “Bhagat Shiromani Sant Satramdas Sahib ji” of Raharki, chanced to visit the village of Haji Gaon, situated at the distance of one mile from Jatoin. Like all other devotees who had gathered from the neighbouring villages, Bhai Ludhrodmal, alongwith his son Asudaram, also reached Haji Gaon, to seek the Darshans of the saint. At the end of the satsang, Bhai Ludhromal implored the saint to take Asudaram in his service. Satramdas ji granted the request and looking lovingly at the child, said that, “this child is undoubtedly mine, he was only born at your place, when he becomes young and strong, bring him to Raharki Darbar” In those days it was a great accomplishment to be even accepted for “Guru Sewa”, and that too by as renowned and exalted a Saint as Satguru Sai Satramdas ji. Thus it was a great blessing.

With the grace of Sant Satramdas, the young child lost all attachment towards the world and was now completely devoted to the worship of the almighty. He would now spend most of his time in deep contemplation, like one who had renounced the world. He would always express a deep yearning to meet the great Satguru again. During this time Bhai Ludhromal ji brought the young Asudaram to Raharki Darbar and entrusted him into the services of the disciple of Sant Satguru Satramdas Sahib, Sant Shiromani Kanwar Sahib ji, who was now serving and managing the affairs of Raharki Darbar, after the holy demise of Sant Satramdas ji. Sant Kanwarram ji, not only accepted young Asudaram ji into the services of the Guru Darbar, but also blessed and favoured him just as his own guru had blessed and guided him. Sant Asudaram ji too dedicated himself entirely to his Guru, serving him “mansa vacha karmana”; serving him with his heart, body and soul, following every word and command.

Sant Asudaram Sahib served the holy cows with great love, and unparalleled devotion. He would clean the cowshed and the place where the cows would sit, make the floor soft enough, and ensure that there were no thorns or stones to hurt the cows that he looked upon as a mother. He did so by lying down on the floor unbraced to check if it was comfortable enough. Only after having ensured this, did he bring the cows into the shed. This cowshed is functional till date.

He always slept in the “Samadhi Kaksh”, sepulcher of the holy saint Sant Satramdas ji. Despite the fact that Sant Asudaram ji wanted to devote his entire life only in devotion to his Guru, yet he entered into the “Grahasth Ashram” and into matrimony, after his guru instructed him to do so. He laid the foundation of his “Grahasth Ashram” as per the wishes of his Guru, because his Guru believed that true service unto others can be achieved only while one is the grahasth ashram. Observing the indifference and spirit of renunciation even though married, Sant Satguru Kanwarram Sahib ji blessed the new couple and bestowed upon Asudaram ji the title of “Shiv Swarup” (one who is like Lord Shiv).

Following the commands of his Guru, Sant Baba Asudaram ji established “Darbar Sahib” in his native village of Panno Akkil, in the year 1940, which has gained recognition and fame in India and Sindh, a place where activities for social welfare and and innumerous services are rendered perennially. The ‘Sadavrat or Bhandara’ goes on continuously 24 hours a day, in the Darbar of Sant Baba Asudaram Sahib ji. Not only food but cold, sweet water is also served round the clock. This service is rendered unto all without any discrimination whatsoever.

In his path of worshipping the divine and serving the poor and needy, Sant Baba Asudaram received such sublime grace that till date not one desirous devotee returns empty handed from his darbar. Even the desperate and hope-less return with a new lease of hope and feel rejuvenated. His Speech had been blessed by the almighty, he suggested easy remedies to incurable diseases. His blessings miraculously filled the life of child-less couples with the gift of a child, and the lives of the needy with self-satisfaction.

This holy place saw the establishment of several service centres. There is a home for the elderly, where destitute and homeless and also the physically handicapped are served with tender loving care. This small town has also been provided with a huge, magnificent hospital, which caters to a large number of women, children and men (indiscriminately), employing the latest medical technology and therapy. Today the Sant Baba Asudaram Darbar is not only a Spiritual centre but also a centre for social awareness and human welfare. Today various kinds of social service are being rendered in all the different towns around Panno Aakkil, through the Sant Baba Asudaram Sahib Darbar. There is a “paathshaala” which caters to the educational needs of several hundred students every year. In this paathshaala, Hindi is also taught to the students alongwith the traditional “Gurumukhi”.

The dedicated, self-less, Saintly Baba Asudaram Sahib ji left this material, mortal world, after fulfilling the tasks assigned by the lord unto him, for his heavenly abode on Sunday, 4th September 1960, on the auspicious day of “Anant Chaturdashi ( miti 19 month Bhado, Samvat 2017). On 15th September 1960, on the twelfth day after his demise, i.e. “barhvi”, Satguru Dar’s (Raharki Darbar) Hazir Sant Bhagat Chandiram Sahib ji laid the foundation of the Sant Baba Asudaram Sahib Samadhi, and installed the young adolescent son of Baba Asudaram sahib- Sai Chandruram Ji, on the “gaddi”, spiritual seat of his father, and crowned him with the Paakhar, (siropa) of the guru darbar, thus commencing a new tradition.