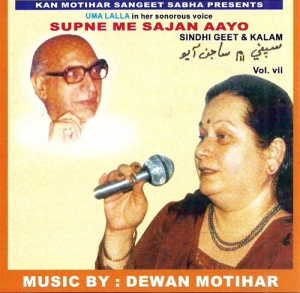 Smt. Uma Lalla, an upcoming enterprising artist par excellence, is blessed with a melodious and sweet voice. Her enchanting voice has enthralled audiences and has been applauded by those who have attended her numerous stage programmes. She displayed an inclination for music and special aptitude for signing at a very early age.

She was exposed to formal training and completed a four year diploma course in classical music from Allahabad University at the age of just 13 years. She has been a disciple of the reputed musicians late Shri Deewan Motihar. Under his guidance she had introduced two cassettes one is Bhajan and second is Sindhi Kalam and Geet.

She can sing in four languages with ease in Sindhi, HIndi, Punjabi and Bengali which is a testimony to her immense versatility. She has presented many programmes on T.V., Doordarshan and Radio in last couple of years.

She was invited by Sindhi Association of California, USA in 1995. She has recently visited Sindh Pakistan and performed a number of programmes which were highly appreciated. In one of the programmes in Sindh, she performed along with Abida Parveen known Sufi singer of Pakistan. She had been to Hongkong and Dubai recently. She was also awarded SINDHI RATAN AWARD.