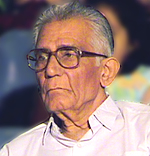 Arjan Jethanand Tanwani born on 7th January 1930 is well known Poet and writer in Sindhi community. He is given the title as "Hasid" in his name. His roots are from the city of Karachi, Sindh (Now in Pakistan). He is currently settled in Ahmedabad, India.

Arjan Hasid has written several books on poetry. Few of most significant contributions are