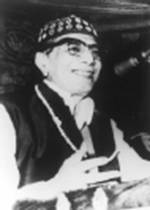 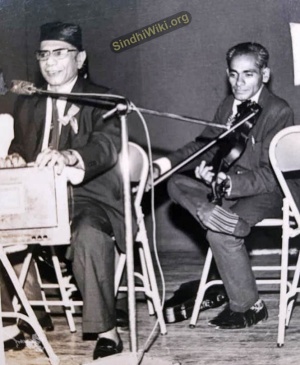 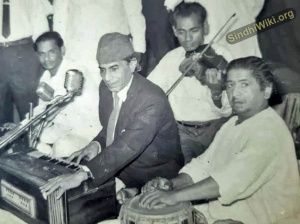 Master Chander is Legend of Sindhi Music. He was first to sing Kalams and songs related to love in Sindhi Language. Master Chander was born in Tharushah on 7-12-1907. His songs were recorded by HMV records. There must be thousands of songs sung by Master Chander, but hardly 400 songs information is available. He could very easily form the lyrics of the songs and perform a song on that in no time. That is one of the reason, they were not officially recorded and available publicaly.

Master Chander had a passion for music from his childhood. Born in a Zamindar family, where singing was considered a ‘taboo’. Master Chander faced great odds in acquiring rightful place in the field of music in Sind. He was not only the most popular singer of HMV, but also a legendary figure, who brought new singing wave in Sind. He could truly be called a ‘melody’ that touched the very pulse of man who, was love lorn, distressed & disappointed. His renderings kept the audience spellbound for hours. One of his rendering ‘Rutha Ee Rahan, Para Hujen Hayati’ (Let them live longeven when they are not on good terms)was most popular. He had the knack of keeping his audience, spell bound for hours.

Sangeet Acharya Master Chander, also known as the Legend of Sind was born on December 7, 1907 in the town of Tharushah, Sind. He hailed from a merchant and land owner family.

Master Chander was indeed a only child born to his parents from ( Matai Khandan) Zamindar Mr Assandas & Mrs Rami Bai Damwani. He changed his surname to Damwani as his Great Grandfather was Zamindar Damo Mal Matai and Master Chander was the seventh Peedhi(Generation) of the family.

As a child, Master Chander was very fond of music, however, since music was looked down upon in those days, he studied music secret. But, he was encouraged to study music by his uncle, who also bought him his first harmonium from Calcutta.

Master Chander, recorded his first song and hit "Sunhina Arza Ahe" in 1932. This song became a phenomenon on the radio- the song was unlike any heard in the early days of radio. It was a mix of classical music and a style his own, of what now we can categorize as an early rendition of Rap and R&B. After his first hit, there was no looking back. His career spanned 50 years.

Like many famous singers of today, who venture into movies, so did Master Chander in the late 1930s. He worked in films including "Dilaram" and "Maut Ka Toofan", in which he played the hero. He was also cast for "Achoot Kanya" with Devika Rani but was later replaced by Ashok Kumar. Sadly, prior to production of this movie, two of his five sons passed away within months of each other. He was needed at home and thus ended the movie career of Master Chander. But, Master Chander did record seven songs for "Achoot Kanya".

Master Chander was not only a singer and actor but also a poet and music director, he provided music for his most popular songs. Among his contemporaries were many other singers such as Jeevni Bhai, Allah Rakhi, Bhagat Motan, Bhagat Kanwer Ram, Jaro Bhagat, and Sawami Kundan, however, Chander always had his own style and was ahead of the game.

Master Chander was more so famous among the younger generations of that time- you can say his fan following and musical hits reached the heights of Elvis Presley and the Beatles. His songs "Rutha Ee Rahan Perr Hujain Hayati", "Dil Ahey Hathan Mein", "Rana Vahju Na Ute" and "Kabootar Kabootar" as well as many other songs were very popular not only in Sindh, but all over the world. 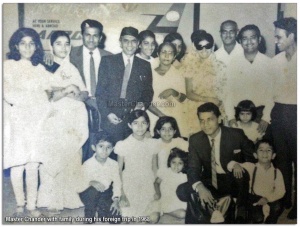 Master Chander with Family during foreign trip in 1968

One of the most endearing songs of Master Chander was "Nandri Nandri Ahiyan"- a story of an eight (8) year old girl, her servant, Pirla and a thief. It was sung in a story telling style. The song was recognized by Prime Minister Jawaherlal Nehru in the early 1950s.

Beside his own poetry, Chander sang songs written by the great poet Prasram Zia. Master Chander's music was copied by the music directors of Bollywood. Master Chander was the only singer in the entire history of HMV music who was paid 7% of royalties, others were paid 5%.

In 1947, during the partition of India, Master Chander and the majority of Sindhis were forced to leave their homes and properties in Sind. He narrowly escaped his own death during those tumultuous days, having sent his family- his pregnant wife, Heti, mother, three sons and three daughters, as well as extended family members ahead in a ship to Bombay, India. Seeing the plight of his people and missing his homeland, he began to write and sing songs about giving confidence to the displaced Sindhis in India, some of the notable songs during this period were "Mitha Abana" from the movie AbanaMovie with well known Sindhi actors and actress, "Kismat Kai Judai" and "Hoshiyar Sindhi".

After the partition, living in Bombay with his growing family, he continued to record music and sing in films. He also vocally trained his sons Gope and Mahesh Chander. Gope Chander, lives in New York and is a well known singer throughout the United States. Mahesh Chander is also a famous singer, known as the "Man with the Velvet Voice", he is a music director, who has won many awards, including being recognized for composing the poetry of Prime Minister, Atal Bihari Vajpayee.

In 1955, Master Chander was given the rare opportunity to give a concert in Sind, and he did so along with his son Gope Chander. There they were warmly welcomed by the people of Sind and Pakistan. After his return to India, he never visited Sind again, but gave concerts all over the world during the 1960s and early 1970s.

On 3rd November, 1984, the music stopped and Master Chander left behind a lifetime of music, songs and his family to become "The Legend of Sind".

The music continues with Master Chander's sons- Gope Chander and Mahesh Chander, grandchildren- Arti Raj Chander, Harish Chander and Anil Chander. The music will forever continue with future generations from his family and beyond.

Apart from being great singer, musician & poet, Master Chander was also great Author who wrote these books during his lifetime.

Master Chander married to Smt. Heti and succeeded by family like this.