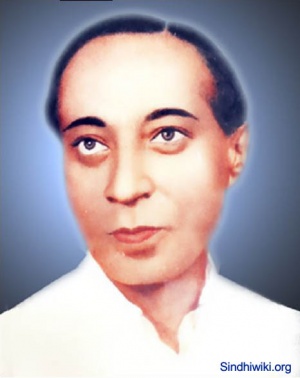 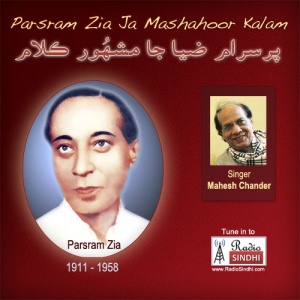 The Legend, Late Shri Parsram Hiranand Sachanandani ‘Zia’ was not a mere poet, but he was Master of Poetry & Lyrics. He was not highly educated. He studied only up to high school, but his hold on the language, selection of words to suit with the rhythm and the situation was just a “Child’s Play”.

Parsram Zia, born on 11th July, 1911, at Tando Adam (Sind), Now in Pakistan. He was born in a very simple, sober and not so rich family. He became Hero in the field of Lyrics and poetry at a very young age. He ruled the hearts of masses in Sindh as well as in India after partition. Some of his literary Achievements and contribution to the society as poet are as under:

At the age of 14, Parsram Zia started writing poems under the tutelage of Ata Mohammed, first under the pen name of “Parso”, and then “Ranjor”. His first collection of poems “Gulzar Ranjor” was published in 1936. He learnt the art of prosody from Shaikh Murad Ali Qazim for four years and on his advice, adopted a new pen name “Zia”, means “Light”. In addition to above, Zia Saheb translated several religious books in SINDHI POETRY FORM like ‘Bhagvat Gita’,’Jap Saheb’, ‘Naaem Mahile Jaa Saloka’ ‘Sukhmani Saheb’ etc., which are possessed by most Sindhi families and read as Sacred Holy Books. Sukhmani Saheb was recited and recorded in the melodious voice of Late Bhagwanti Navani, with the courtesy of India Book House, Mumbai, which is played even today with great zeal and respect in almost every home, sindhi Temples and Gurudwaras. The books and CDs are being preserved as valuable treasure.

As Lyricist, Zia Saheb has written songs for number of Sindhi films, such as ‘Abana’ (Parents), ‘Laadli’ (Beloved), ‘Jhulelal’ (God of Sindhis), ‘Insaaf Kithe Aahe’ (where is justice), ‘Kanwar Ram’ and ‘Rai Diyach’. He recorded more than a thousand songs for various Gramophone Companies, which were mostly sung by very famous singers such as Master Chander, Savitri Gidwani, Jara Bhagat, Motan Bhagat, Ranjhan Bhagat, Balu C. Rani, Prof. Ram Panjwani, Dr.Azad Sufi, C. H. Atma, Satram Rohra, Bhagwanti Nawani etc. The songs have a great mass appeal, especially the love songs immortalized by the voice of Master Chander are still very much alive in both Hind and Sind and are being repeated by many young singers in every mehfil. He tried his pen in Urdu and Hindi too. “Badhi Bhool Hui, Tujhe Pyaar Kiya” was his hit song. He received an award from Sind Govt. in 1943 on his collection of poems “Tasveer Ahsaas” and also another prize on his unpublished manuscript “Adbi Gul”. Later, in 1958 he received the most prestigious Award from Ministry of Education, Govt. of India for the outstanding literary contributions. Apart from that, he was honoured by several Sindhi Panchayats/Associations at various Sindhi programs and also received trophies and other gifts of enduring nature.

By profession, Zia Saheb was a teacher of Sindhi Language. For some time he worked in a printing press as Compositor. By nature he was very simple and God fearing person. One of his outstanding qualities was that he was always optimistic. He was never greedy. Writing was his passion, not profession. It is said that once some producer of a film came to him for writing a song for his film, explained him the situation and offered him Rupees Fifty, if he gets the write up to his satisfaction. He gave him one week’s time. However, as Zia Saheb used to write a poem or lyric within minutes, he wrote the song within five minutes and gave it to producer. Though he was astonished and very happy to read it, as it was well composed and best suitable with the situation, he was very jealous too, for the reason, how one can earn rupees fifty in just five minutes. He refused to pay him consideration amount. But Zia Saheb, simply ignored his cruel attitude, smiled and forgot.

After partition, Zia Saheb came to India and settled at Ulhasnagar, Barrack No.1085/5, O.T. Section, the then Military Camp. His Grand and Great Grand children still reside at this place. His neighbour was his very close friend and associate, Sangeet Acharya Late Master Chander, who sung numerous songs written by Zia Saheb right before and after partition as well. His Master’s Voice (HMV) Gramophone Company recorded various songs of the duo. Soon, their bond of friendship culminated in close relationship, when his daughter Gopi betrothed to Master Chander’s son Shri Gope Chander, presently settled in New York. Soon after the marriage of his son, Master Chander shifted from Ulhasnagar to Shivaji Park, Mumbai. Gope Chander and his children Arti Raj, Harish and Anil are the Star singers in United States. Here in India, Shri Mahesh Chander, youngest son of Master Chander has created havoc in the Sindhi Music Industry. People go crazy to listen him in live concerts particularly for the Ghazals, originally sung by Master Chander.

Apart from daughter Gopi, Zia Saheb was having one son Naraindas too, who after retiring from business, surrendered his life to the society for promoting and preserving “Sindhyat”. He actively participated many seminars on Sindhyat in India and abroad also. He was the publisher of a quarterly magazine titled “Zia”, wherein along with Zia Sabeb’s unpublished work, a suitable space was given to the articles, short stories, poems and ghazals of new upcoming writers, as a mark of their encouragement. Shri Naraindas was very active and straight forward person, who, at the age of 87, left for heavenly abode on 18th February, 2013.

While residing at Ulhasnagar, Parsram Zia, wrote many poems full of mirth and satire reflecting the desperate condition of refugees dumped in Military barracks. His poem ‘Pitte Thi Pohua Mau’ was classic. His songs of film “Abana” – “Daal Chhola Dhabal” & “Hede Hede Hede Ta Nihaar” reflecting the camp life are still very popular as condition of Ulhasnagar match with the message given in these two songs, even today. About half a kilometer road of O.T. Section, Ulhasnagar-3, approaching to his residence is named as “PARSRAM ZIA ROAD” and fly over bridge connecting Ulhasnagar East & West is also named as “PARSRAM ZIA UDHAN PUL” by Ulhasnagar Municipal Corporation. Another fly over bridge connecting Ulhasnagar West and East is named as “MASTER CHANDER FLY OVER BRIDGE”.

At a very young age of merely 47 years Parsram Zia passed away on 28th October, 1958, left behind a very precious literary wealth for the whole community. Through his lyrics, poems and Sukhmani, he shall remain alive in the hearts of Sindhi Masses for ever