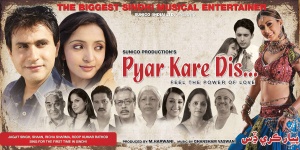 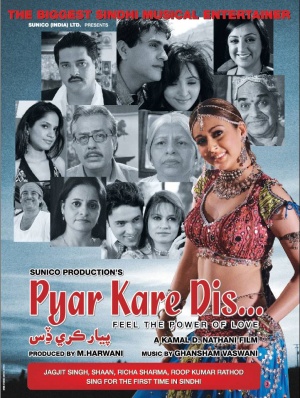 Pyar Kare Dis - The Power of Love (Sindhi language: प्यार करें दिस्, پِيارَ ڪري ڏِسُ') is a 2007 Sindhi film, directed by Kamal Nathani and produced by Mr. M. Harwani. This is a movie about families separated by countries and cultures. It raises many social issues usually Sindhis are surrounded by in all the families. It has all the ingredients of successful movie, Action, Comedy, Drama and also one item number by Preety Jhangiani. Many Bollywood Singers has given their voice to track collection.

Puja (Menka Lalwani), daughter of a businessman Ram Mata (Prakash Ramchandani) based in New York, is excited when she learns news about wedding of her cousin Sunder (Vishal Watwani), scheduled in a month's time at Pune, India. She, at once, decides to visit India, the country of her origin. On her way from Mumbai to Pune, she meets Dev (Jiten Lalwani), a handsome boy and falls in love.

At home, she notices aunty Padma(Seema Motwani) dominating the household and her uncle Murli's (Neeru Asrani) home is in a mess. Dadi (Jaya Asrani), who is not keeping well, is being ignored. Her cousin Sangita (Gujan Thawrani) is not allowed to do anything on her own. She has to take permission of her mother for everything. Murli does not want any tension in the house so he does not interfere. Every member of the family including Sunder, has surrendered to the whirs and fancies of Padma.

With preparations for Sunder's wedding in full swing, Puja begins to take things in her own hands. Twist in the tale comes with revelation that Sunder is not happy with the marriage as he is in love with a Christian girl Rosy (Mehak Bhatia).

Puja decides to fix the problem with the help of Dev. She meets Sunder's fiance and tells her about Rosy. All hell breaks loose, when news comes from Sunder's future in-laws that they have decided to break the ties. Puja and Sunder come under attack from Padma. Following a major showdown, Sunder leaves home in anger. Puja is shocked at these happenings.