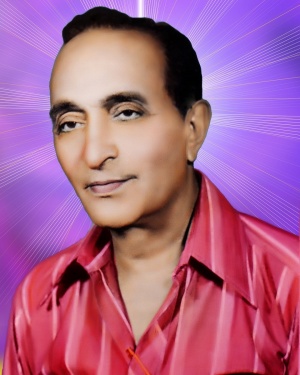 Master Ranjhan, well known Sindhi Poet, born on 24 th August,1920 at Ghadiyasi Village in Sindh, Now in Pakistan. His father had owned a small business. Master Ranjhan was the eldest amongst his five brothers. From his very young age he developed the passion for music and started writing poetry and even composed for his songs- a MASTER by his WORK

As it is rightly said your words reveals your character, similarly the simplicity and the meaningful heart touching poems by this young master revealed his miraculous character which had stolen the hearts of many. He was the writer, singer and music composer all together. He has composed classical sufi songs, Jhulelal (God of sindhi community) song, Laddas and some comedy songs too. His songs were given voice by great legends like Padam Shree Prof. Ram Panjwani, Bhagwanti Navani, many sufi singers from Sindh, Bollywood singers and was also recorded by them. Master Ranjhan and Dada Ram Panjwani had a very good understanding and chemistry. They had performed many programs together all over India.

He came to India after partition as a refugee, but he never gave up his passion towards music even in those difficult days. He was a saint (dervesh) by nature and a great poet. He is the pride of the SINDHI community as well as SINDHI sufiyana music. He was a disciple of Satguru Swami Rochaldas. He celebrated the Varsi Mahotsav of Satguru Sai Rochaldas every year and people use to come from different parts of the city and enjoy the Chowki.

His first cassette was released with great enthusiasm and got an overwhelming response.

His Golden collection of songs such as "Muhinje Bedi Aathai Vich Seer Tai", "Allai Cha Mein Razi Aa", "Tu Muhinjo Sain" are still the popular songs. Not to forget the song "Muhinjee Bedi Aathai Vich Seer Tey" has been remixed by many artists and singers not only in India but also in Sindh and other parts of the world in various styles. This is timeless collection song and super hit for almost 50 years. It is considered any Sindhi celebrations are incomplete without this song. His songs are being cherished with great love - may it be Jhulelal's Berana, Chaliha Sahib or Sindhi Laddas.

Master Ranjhan's glorious collection is a Treasure not only to the upcoming Sindhi singers all over the world but also to the Sindhi Community. Sindh is proud to have such LEGEND in Sindhi community.

Master Ranjhan Sindhu Bhavan is open to public by his family, for cultural performances at Ulhasnagar 3, Near Chopra Court.