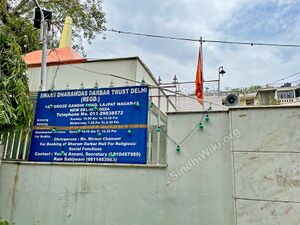 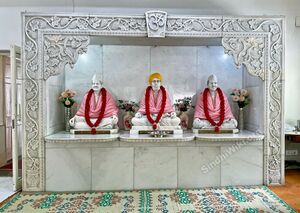 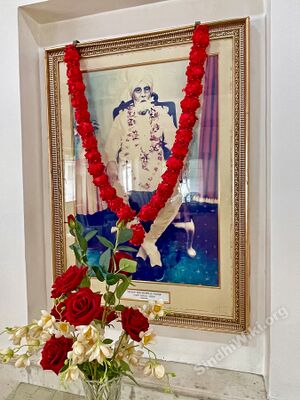 Swami Dharamdas Darbar was initially established at Larkana (Sindh) (now in west Pakistan) between 1881 to 1904 by disciples/ Dharam Baliks/Balikas of Swami Dharamdas Sahib (1854-1947, Pratham Patshahi) for propagatina the teachinas and Dharam Vani of sahib. Dharamdas Sahib. He was born in Village Thoro in Kambar Taluk of Larkana District (Sindh). Swami toured India extensively and soon had a large following of devotees who spread the message of Love and Renunciation through 'Satsangs'. The focus of the teachings of Swami Dharamdas Sahib was "Love of God and surrender to him'

During his life-time Swam Dharamdas Sahib had announced that after him the Gaddi will be held by his adopted son Swami Atalram Sahib to be further succeeded by his Chela Swami Pesuram Sahib.Accordingly, in June 1947 the reigns of Dharam Darbar was handed over to Swami Atalram Sahib (1889-1958, Second Patshahi) Born on 18th February 1889 at Larkana District, Swami Atalram Sahib started service to God as a small boy and continued his mission for nearly half a century. After partition Swami Atalram Sahib came to India and established Dharam Darbar at Ulhasnagar (Kalyan-Mumbai). During his life time he bought a piece of land at 14, Feroze Gandhi Road, Lajpat Nagar-3, New Delhi-110024 and laid the foundation stone of Dharam Darbar in February 1958. His pilgrimage on earth ended on 9th December 1958 and the mortal remains of this great Saint were consigned to flames at the premises of Dharam Darbar, Lajpat Nagar-3, New Delhi-110024 where his Dah-Kriva Asthan has been built and is visited by numerous devotees from far and near. After the passing away of Swami Atalram Sahib, Swami Pesuram Sahib (1902-1964), was installed as Guru (Third Patshahi) in accordance with the desires of Swami Dharamdas Sahib. This great saint was born on 2 February 1902. His entire life was devoted to the service of Swami Dharamdas Sahib and due to his dedicated service he endeared himself to all and earned a place next to Swami Atalram Sahib in Dharam Darbar, Larkana. After partition Swami Pesuram Sahib came to India and settled in Baroda and continued his services at Dharam Darbar, Baroda. Swami Pesuram Sahib was a great visionary. A day before leaving his mortal body on 20 December 1964, he executed a WILL on 19th December 1964 by which he appointed Trustees to manage the affairs of the various Darbars located at New Delhi, Ulhasnagar and Baroda. The highlights of the WILL registered in Civil Court, are -

Swami Dharamdas Darbar situated at 14, Feroze Gandhi Road, Lajpat Nagar-3, New Delhi-110024, is being managed by Swami Dharamdas Darbar Trust, Delhi (Regd.) as per the provisions contained in The WILL of Swami Pesuram Sahib (Third Patshahi). The Trust remains committed to propagate the memories of the Satgurus and help the cause of the poor and the needy and celebrate memories of the Satgurus and auspicious days noted in this Patrika.

Sindhi and Gurmukhi, Sindhi Kalams and Bhajans for young adults. With the divine blessings of our Satgurus - Swami Dharamdas Sahib, Swami Atalram Sahib and Swami Pesuram Sahib, the Darbar premises has grown from a small one room structure in the 1960's to what it is today a large Air Conditioned Satsang Hall (seats 300 people) and modern amenities

SOME OF THE PLANNED FUTURE ACTIVITIES ARE

(NOTE: ALL DONATIONS ARE EXEMPT UNDER SECTION 80G OF THE INDIAN INCOME TAX ACT.)

Dharam Baliks are requested to send their updated malling adaress and e-mall address to The Secretary, Swami Dharamdas Darbar Trust. Delhi (Regd.) 14, Feroze Gandhi Road, Laipat Nagar-3, New Delhi -110024 so that information about the activities at swami Dharamdas Darbar can be communicated.

Additional information can be obtained from the following

For Booking of DARBAR HALL for Religious Functions Contact:-